With the unsettled weather of late, my low-lying, lakeside garden plot is still a bit too wet to plant potatoes. The winter ground cover of annual rye has been tilled twice during the sunny days in between the bouts of rain. Once the soil is somewhat drier, and the last of the rye has decomposed, the tubers can go in. To avoid having to cut large potato sets into smaller pieces, I try to select egg-sized starts. I think of laying the small ovals into the deep furrow, and carefully covering them up with soil, as a post-Easter hiding-the-eggs ritual.

Later on, the harvest of all the full-sized spuds is a delayed treasure hunt. The hope is to dig up good-sized potatoes with as little disease as possible, either black scab on the outer skin or soft brown rot inside.

Given our relatively mild, wet winters, potato diseases tend to linger on in the soil. To prevent buildup of disease, it’s especially important to plant disease-free seed, to rotate plantings each year, and to promptly remove any potentially diseased seedlings that may sprout from unharvested tubers, missed by the potato fork in the fall. Potatoes are the one carbohydrate reliably grown in the home garden, so guard the crop each year against the spread of disease.

One of the few dry spots in the spring garden are the raised beds of the over-wintered leeks. Once the last of the alliums are harvested, the soil on the high mounds dries out quickly and can be worked up easily with a fork. The soft, white leek roots will dissolve easily back into the soil, maintaining the airy tilth of the ground. Since I grow various brassicas year-round, I have to make sure there are beds opening up that were not previously planted with any member of the cabbage family. Thus, my leek beds become the first place for starts of early cabbage and broccoli. At the opposite end of the cycle, the last of the over-wintered cabbages are just being used up. The cut stalks left in the ground are pushing out small side sprouts that are perfect for stir-fries, late additions to soups, or eaten fresh.

Brassicas are easily grown in each season, but they do require protection from insects in the spring. The cabbage root maggot fly appears early in the year and it will decimate seedlings. The only protection is to cover the plants completely with floating row material such as Agribon, carefully sealing all the edges on the ground with boards, metal fence posts, or soil. The plants must be kept isolated from the small fly, which lays its eggs near the stalk of any young brassica. The maggots then migrate through the soil to feed on the soft roots, causing seemingly healthy six-inch starts to suddenly keel over.

As the brassicas grow under the protective tent, the white material can be supported by metal or plastic hoops and secured in the wind by clamps. You can water plants through the row cover, but you will need to lift the cover to remove weeds, which thrive under the slightly warmer temperatures under the small hoop house. Once the brassica plant is full-sized, and the stalk is thick, the plant is relatively safe and the cover can be taken off.

But, the next insect soon appears, the white cabbage butterfly, dancing over the leaves, looking for a mate. As long as the throng of butterflies is not too thick, I don’t mind a small number of green caterpillars that will show up later on. If it’s a problem, keep the maturing plants under the row cover until it is time to harvest.

Actually, it’s quite a thrill to finally remove the row cover and reveal mature, healthy broccolis or cabbages underneath. Almost like magic.

Snails and slugs are an important part of the natural composting cycle in nature. Think of them as digesters of the plant or organic material that accumulates on the ground. In the garden, however, if you have too many, they can become a problem. They’re especially attracted to young vegetable starts, so it’s important to start removing the initial spring buildup of these creatures. I find the easiest method is to lay boards by the side of the garden beds, or near any particularly wet spot. After their nighttime forays, the snails and slugs will hide out under the boards during the day. Flip the boards over, remove or squish the critters and replace the flat traps for the next accumulation. Also, keep an eye out for any nest of small, pea-sized, translucent slug eggs in your garden soil, most likely in an undisturbed spot, hidden just under the surface. Squish again, to prevent a new wave. With the advent of dry summer weather, the population of slugs and snails diminishes. 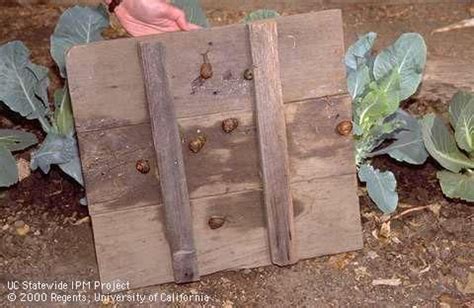 But it’s wise to keep the numbers in check all season long.

Snails will also gather on the large stalks of over-wintering cabbage, kale and Brussels sprouts, hidden by the thick layer of leaves and protected by their hard shells. My understanding is that the local population, which arrived here as an invasive species a few decades ago, are Asian land snails, not the edible variety consumed in Europe. Nor are they the small, but tasty Turk’s Head snails served along with sushi in Japan. A flock of free-range ducks would gladly eat the snails in your garden, but that involves another level of animal husbandry.

Note: I use Sluggo pellets in small amounts only when necessary to protect small starts during very wet weather. Any paste or liquid snail bait can be fatal to birds, who pick up the chemical on their feet.