Watering in the Heat

The first half of August usually brings the hottest weather of summer, but the impact of climate change has brought more intense heat waves, with the daytime temperatures on Fidalgo Island consistently in the 80’s. We are fortunate, being close to the cooling effect of Puget Sound, which creates late afternoon onshore breezes that can take the edge off the heat. The nighttime temperatures, however, have been staying in the 50’s, even during the heat domes. The cool nights, a harbinger of the fall weather that will start to creep in later in the month, have also created the grey mold on the leaves of the big leaf maples as well as on the foliage of some winter squash.The vegetable gardens, however, still require a great deal of water to deal with the overall summer drought. The basic garden watering mantras hold: water early in the day, to avoid loss of water to evaporation, and to give the plants time to absorb prior water prior to the daytime rise in temperature; use a protective mulch of some kind to protect the surface of the soil from drying out and to keep the soil moist around the root zone of the plants; and, water deeply on a regular basis, when the soil begins to feel dry to the touch at a depth of 2-3 inches, usually every 2-3 days. Watering too lightly and too often keeps the roots close to the surface of the soil, and the plants are easily dried out on hot days. For some crops that are producing heavily right now, such as pole and bush beans, I water more frequently in order to ensure a sustained crop of tender and sweet beans. Unless you’re raising dry beans or saving seed, remove any pods that get too large and tough in order to keep the plant producing more flowers. It can be difficult to think about fall and winter crops while it’s still high summer, but now is the final window to put in over-wintering leeks, cabbages, late cauliflower, purple sprouting broccoli, and hardy leafy greens. I water the young transplants each morning to give their still-fragile root systems moisture to deal with the intense sun and extended day length of our northern latitude. The reward in late fall and through the winter is a sustained crop of fresh produce that can be harvested from the garden even on the coldest and wettest days. Other semi-hardy winter vegetables to consider, which may need some protection from a row cover tunnel, include daikon and black Spanish radishes, non-bulbing leaf turnips, hardy mustard, broccoli Raab, and cold-resistant greens such as mache, arugula, and winter spinach. There is no need to shut down the garden in late fall. The key is to plant early enough in late summer to allow the plants to reach an adequate level of maturity before the cold and short days arrive. The plants then essentially coast through the winter, sprouting fresh shoots, leaves, and buds in response to the warmer days in between the storms. Winter is the fourth season of year-round gardening.

During August one should not forget to water existing perennial beds, such as asparagus and artichokes, which have already produced a main crop, but still need doses of water to keep their root structures growing until the cool fall rains arrive. For standard crops such as corn and squash, regular deep watering is needed to keep them on schedule. I do have some late planted large sweet onions that are still green since they are in half shade, which are still getting a bit more water. The main crop of storage onions, however, has reached maturity, and the half-brown tops have been bent flat to the ground to stop further growth and dry them out in the sun. It’s important as well to know when to turn the spigot off. Onions drying in the sun

The hoop house requires a more intense and sustained regimen to keep the tomatoes, peppers, cukes and tomatillos properly hydrated. To prepare for the hottest days I covered half the roof with two 40-foot bands of light green shade cloth, made from recycled soda bottles, as a way of cutting down on the sunlight. Not a drastic reduction, perhaps 10%, but a noticeable effect on the high temps up at the ridge pole, which can easily soar to 95F and above if left unchecked. The temperature down at ground level is usually 5-8 degrees cooler. Tomato plants will drop their flowers in response to the stress of extreme heat of temps above 90F. Being perennial vines, tomatoes will generate new blossoms fairly quickly but the final crop will naturally be reduced. Pepper plants, as bushes, may drop a few flowers even in normal growing conditions, and are slower to re-flower if impacted by high heat.

Given the still-cool nights, I lower the side walls and end flaps of the hoop house in the evening to keep the temperatures inside above 50 degrees to maintain fruit-setting. I open the house early in the day since the first rays of the sun can easily jack the thermometer to 80-90F. The key to cooling the semi-enclosed space is to keep the air flowing. When the weather is consistently hot I water the beds heavily every 2 days, making sure the mulch and the soil around each plant is properly saturated. On the extreme heat days, especially when there is no wind, I take the added precaution of flooding the paths, creating shallow pools between the raised beds to increase evaporation and to make sure the deep roots get water. Two 50-gallon drums on raised platforms with gravity-fed hoses supply the irrigation system for the hoop house. So far, I’ve managed to prevent any blossom drop due to water stress, relying on a well that feeds off the water table coming from the back side of Whistle Lake. This year there has been plenty of water, but in past Augusts the flow of the well has diminished. Hopefully the increased precipitation during recent winters due to climate change will be enough to continue to supply our gardens during the now extended Mediterranean dry summers.

With the calendar arrival of spring, the official opening of the garden season has begun. Of course there are early cool-weather plants that benefit from getting into the ground before March 21st, especially peas, lettuce, and radishes. But the really important ones to set out early are onions, whose bulb formation is triggered early by the extended day-length of late spring and early summer. It is vital to get onion sets, young plants, or even seed in as early as possible in order for the initial onion plant to size up adequately before the bulb starts to form below ground. We live in the very northern part of the continent, close to Canada, essentially halfway to the pole. Days get longer quickly up here, even now at the end of March. Once April and May roll in, the day-length really starts to stretch out. 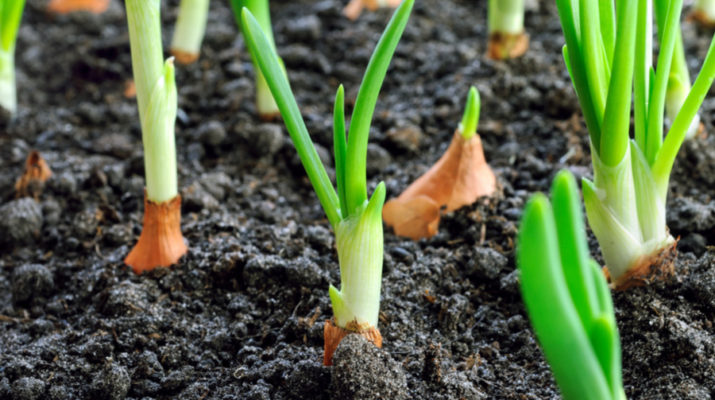 Image courtesy of This is My Garden

As a rule, any seed-buds should be snipped off as soon as they appear in order to keep the plant’s energy going to the bulb. It’s essentially a race against the expanding hours of light, especially with the ever-earlier sunrises. Photosynthesis starts at the crack of dawn, which means the plants will have been active hours before the gardener usually arrives in the morning. So, get your onions in early, to beat the sun-clock.

My yellow and red storage onion sets were planted in their raised bed several weeks ago, while the Walla Walla plants were set out a few days ago. The Wallas, large and sweet, are for immediate summertime eating, as they go soft quickly when stored. There is still a seedling flat of large-size storage onions to transplant, though it may already be a bit late. They may not get as big as advertised, but hopefully the bulbs will be worth storing.

In the spring garden, however, the leeks planted last year in mid-summer are just now sizing up for harvest, just as the last of any stored onions in the pantry have been used up. Leeks are dependable, hardy, and stay fresh in the ground all winter. The leek cycle begins again soon with the initial set of transplants put out in middle or late spring for a late summer or early fall harvest. Be sure to water leeks regularly during the summer drought to keep them from bolting due to stress. But, like garlic scapes, the firm leek seed stalks can be sliced thin for soups or stir-fries. Never let a good stalk go to waste.

In the garden the over-wintered bitter greens, including the arugula, Mizuna mustard, broccoli Raab, and the hardy bok toy, are madly forming buds. As the plants go to seed the leaves develop a much sharper bite, which I, as a medium-level chili aficionado, appreciate for an early foretaste of the hot peppers to come in summer. To use at least a small portion of the burgeoning crop of hardy greens, make a tangy pesto. No need to wait for warm weather basil.

Combine until smooth in a food processor: two handfuls of mixed bitter greens, 4-6 (or more) garlic cloves, a few walnuts, salt, black pepper, cumin, and the juice of a lemon. For a true Mediterranean kick, include half a tin of anchovies, or substitute a few dashes of Thai fish sauce.

(A non-fishy alternative is soy sauce.) Scrape down the sides. With machine running slowly add olive oil, plus freshly ground Parmesan to reduce the bite and give it that creamy pesto mouth feel. But l also like it straight, without Parmesan, on a cracker or a toasted baguette slice. Top with a few capers, a fresh leaf of hardy Greek oregano from the herb garden, and maybe some goat cheese or feta. A leafy spring tonic with a Hellenic snap to it.

Note: Stored in a jar with a surface layer of olive oil, pesto will keep for several weeks in the fridge, or frozen for up to 2 months.